About the Super Y League

Founded in 1999, Super Y is a nation-wide youth summer league operated by the United Soccer Leagues (USL), which is the largest organization of elite soccer leagues in North America.  Affiliated with US Soccer, the Super Y-League contains the youth academies of Major League Soccer clubs, USL PRO clubs, and Premier Development League teams.  Divisions within Super Y are organized geographically, and membership in the league is limited to only a few elite programs to ensure strong competition.

The St. Louis Lions Elite Academy program traditionally consists of up to 3 training sessions a week and 8-10 games with a team.  The league provides an opportunity in the summertime to compete at an elite level.  It also provides players an opportunity to be seen by college coaches & Olympic Development staff.  This opportunity does not conflict with club or high school commitments.  Players from any club are able to participate in this league without a release from their current clubs.  You may play for a Regional Super Y team in the summer, with elite players from the area, then go back to your club team for regular fall league play.

The Super Y-League North American Finals is regarded as one of the top youth soccer events in North America.  This event typically occurs in December at the world-renowned IMG Soccer Academy in Bradenton, FL.  The National Championships are attended by National Team Recruiters, USL Professional Team Staff, and College Coaches from around the country.

The division winners travel to the IMG Academy and play a five-day tournament that includes more than 130 of the best U12 to U18 boys’ and girls’ soccer teams from the US and Canada.  Teams qualify from their respective regions throughout North America.  All teams that earn a birth to the North American Finals are separated into 3-4 Brackets of 4 teams.  The top teams from each bracket advance to the semi-Finals and on to the finals, in hopes of becoming North American Champions.

During League play, players are selected at the end of each game by the home and away coaches as player(s) of the game. These players are noted on the game sheet and these game sheets are reported to the USL staff in Tampa, FL within 24 hours of each game.

At the end of the season, players selected the most are nominated for acceptance into the Super Y Regional Scouting Series in August.  This provides players with exposure to high level training against players at an elite level.

In 2019 our teams will be playing their 8th season in USL Super-Y League as the St. Louis Lions Elite Academy. The season for the league runs parallel to the USL PDL season where our St. Louis Lions have successfully competed for the past 13 years. Games and training typically begins after the spring leagues and State Cup tournaments to enable players from all clubs to participate.

The St. Louis Lions Elite Academy involves 2-3 training sessions a week.  Training starts after regular club tryouts are over around early June and will go through the end of July.  There will be between 8-10 games per team.  There are no games the week of the 4th of July.  Generally, the games are either in Michigan and South Bend, IN.  When we need to travel we play 2 or 3 games in a weekend in order to still allow people to experience the summer.

St. Louis Lions Elite Super Y teams are coached by highly trained and experienced coaches.  All coaches are trained, and licensed through USSF or the Scottish Football Association, in player development and provide a positive player centered environment.

Mr. Anthony Glavin is a fully qualified professional soccer coach and current holder of Scottish Football Association (SFA) ‘A’ Advanced License, and USSF ‘A’ License.  Mr. Glavin, All Star MVP and Hall of Fame Inductee, has been committed to youth soccer in the St. Louis Metropolitan, St. Louis County, and St. Charles County areas for over 25 years.  His lifetime of soccer experience started at an early age as a youth player in Scotland, followed through the professional ranks as a player and coach.  Currently Director of the TG Soccer Club, Head Coach for St. Louis Lions of the USL League, and a former staff member for the Region 2 U.S. Olympic Development Program (ODP).  He has developed many players from youth, through high school, college and onto the professional ranks worldwide.

Geoff is a USSF National C Licensed coach and has been with the Tony Glavin Soccer Club as a coach since 2001 and with the St. Louis Lions Elite Academy since 2012.  Geoff works with the coaches in the club to organize the training of all the Tony Glavin Soccer Club teams.  He helps to organize soccer practices, games, tournaments and works closely with the Head Coaches on team selection and development.  He also acts as a liaison between college coaches and club players for scholarship opportunities and helps organize and facilitate college showcase tournaments for high school players.

In 2013, the U18 girls were USL Super Y Midwest Division Champions and qualified for the USL Super Y League North American Finals in Bradenton, Florida where they finished 3rd.

What are the advantages of St. Louis Lions Elite Academy Super Y?

One of our main goals is to provide a top-notch opportunity and experience for any player that wants to continue playing at a high level during the summer.  Players develop at faster rates through the Super Y-League system by playing in a highly competitive environment.

What does the Super Y-League mean to player development?
This is all about what’s called "professionalizing" player development in the United States and Canada when it comes to the top-level youth players.  It is about allowing the top players to rise to the top and identifying elite level players.  It is about playing top-level soccer 12 months a year, with the spotlight on young players during the Super Y-League season.

Season Dates
The regular season typically begins the first week of June and will go through the end of July. We will avoid most major events such as State Cup, ODP camps etc.  The Super Y-League North American Finals will be held in December at the IMG Academy in Bradenton, FL.

What are the Benefits of Participating in the Super Y-League ODP system?
1. Selection of players in the environment on their club teams as opposed to an open try-out system. Some players don’t perform well in an open tryout process.
2. Exposure to U.S. National Staff team Coaches and collegiate scouts.
3. The scouting system is built into league play and contains no ODP fees.

Invitation Only: St. Louis Lions Elite Academy coaches reserve the right to select any player from any club whether they were able to attend the tryout or not.  Coaches will begin to form their roster through the scheduled tryouts or by invitation only for all roster openings.  Players who attend a scheduled tryout can expect to hear from the age group coach within one week of the scheduled tryout date.  This process helps our coaches to form the best possible teams to compete in the Midwest Region and earn a berth to the North American Championships.

First Team Selection: Players/Parents will be contacted after tryout letting you know what direction coaching staff will be taking with your child and what you should expect and plan for.  Players will be recommended to continue attending future tryout/practice/scrimmage dates to start familiarizing with teammates, coaches and philosophy.  Players must make an effort to attend all games.  Program consists of training 2-3 times week practice and 8-10 Regional games.

Reserve Squad Selection: Players/Parents will be contacted after tryouts letting you know about your child being selected as a reserve squad player for now.  These extra practices may make the difference in making Super Y Team on a later date.  Reserve players are eligible to play in summer league games if coaches see fit.  During the season, Reserve Players may be promoted into the game-day squad.  A fee of $50 per game will be added to the Reserve Player fee, exceeding no more than the total cost for a full-time player.

What is the cost and what does it include?

DOES NOT include player travel expenses or post-season play

Reserve Player Fee (for players who are selected for the Reserve squad): $225

Hotel rooms and travel expenses are not included in the program fees. Additional information and instructions will be provided separately. 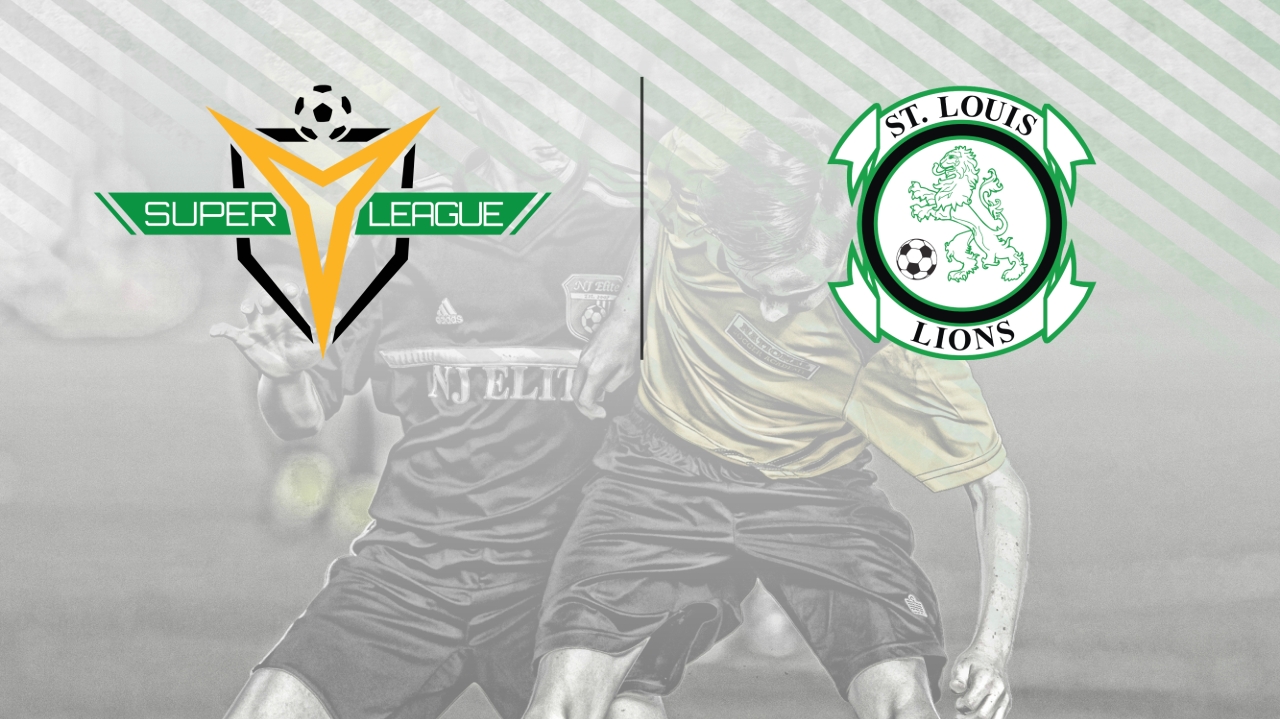 After taking a year off for organizational restructuring, the St. Louis Lions will return to competitive play in the Super Y League in 2018, competing in the Midwest Division.

“We’re very pleased to have the St. Louis Lions back in the fold in 2018,” said Dominic Colarusso, the USL’s Associate of Business Development. “The Lions have a longstanding relationship with the United Soccer Leagues, including a team in the Premier Development League. Their return to the SYL re-establishes a complete pathway for youth players right up to the professional level.”

Prior to taking 2017 off, the St. Louis Lions competed for six seasons in the SYL, providing a home for the development of elite youth talent in Missouri. The club is dedicated to the growth of young St. Louis-area players through a high-level competitive environment and well-established coaching staff and training structure, preparing its members to perform at the next level, including with the Lions U23 team in the PDL.

The Super Y League provides our young elite players a platform where they will be challenged to take their game and level of play to the next level,” said Geoff Lorimier, the St. Louis Lions Elite Academy Director. “The league provides an opportunity in the summertime to compete at the highest level. It also provides players an opportunity to be seen by college coaches and Olympic Development staff.  This will be achieved by quality coaching, the dedication and hard work by each player.”